Abstract: Photoconductive antennas are widely used for time-resolved detection of terahertz (THz) pulses. In contrast to photothermoelectric or bolometric THz detection, the coherent detection allows direct measurement of the electric field transient of a THz pulse, which contains both spectral and phase information. In this Letter, we demonstrate for the first time photoconductive detection of free-space propagating THz radiation with thin flakes of a van der Waals material. Mechanically exfoliated flakes of black phosphorus are combined with an antenna that concentrates the THz fields to the small flake (∼10 μm). Similar performance is reached at gating wavelengths of 800 and 1550 nm, which suggests that the narrow bandgap of black phosphorus could allow operation at wavelengths as long as 4 μm. The detected spectrum peaks at 60 GHz, where the signal-to-noise ratio is of the order of 40 dB, and the detectable signal extends to 0.2 THz. The measured signal strongly depends on the polarization of the THz field and the gating pulse, which is explained by the role of the antenna and the anisotropy of the black phosphorus flake, respectively. We analyze the limitations of the device and show potential improvements that could significantly increase the efficiency and bandwidth. 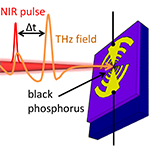