Abstract: We present ultrafast slotted optical time-division multiplexed networks as a viable means of implementing a highly capable next-generation all-optical packet-switched network. Such a network is capable of providing simple network management, the ability to support variable quality-of-service, self-routing of packets, scalability in the number of users, and the use of digital regeneration, buffering, and encryption. We review all-optical switch and Boolean logic gate implementations using an ultrafast nonlinear interferometers (UNIs) that are capable of stable, pattern-independent operation at speeds in excess of 100 Gb/s. We expand the capability provided by the UNI beyond switching and logic demonstrations to include system-level functions such as packet synchronization, address comparison, and rate conversion. We use these advanced all-optical signal processing capabilities to demonstrate a slotted OTDM multiaccess network testbed operating at 112.5 Gb/s line rates with inherent scalability in the number of users and system line rates. We also report on long-haul propagation of short optical pulses in fiber and all-optical 3R regeneration as a viable cost-effective means of extending the long-haul distance of our OTDM network to distances much greater than 100 km. 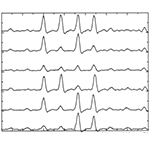