Abstract: In this thesis, we discuss our efforts in developing porous silicon based devices for terahertz signal processing. In the first stage of our research, we demonstrate that porous silicon samples fabricated from highly doped p-type silicon can have adjustable refractive indices ranging from 1.5-2.1 and can exhibit a resistivity that is four orders of magnitude higher than that of the silicon wafer from which they were made. We show that the porous silicon becomes stable and relatively lossless after thermal oxidation. The partially oxidized porous silicon is shown to exhibit a smooth absorption spectrum, with low absorption loss of <10 cm^-1 over the entire terahertz spectrum. As a proof of concept, we fabricated, for the first time, a porous silicon based multilayered Bragg filter with reflectance of 93% and full-width at half-maximum bandwidth of 0.26 THz. Compared with other multilayered filtering techniques, porous silicon has the advantage that it can be easily fabricated, and offers the possibility of forming multilayer and graded index structures for more advanced filters. The large surface area of nanoporous silicon makes it an especially attractive platform for applications in biochemical detection and diagnostics As part of our effort in developing terahertz waveguide for biosensing, we reported the world's first porous silicon based terahertz waveguide using the principle of surface plasmon polaritons. The effect of porous silicon film thickness on the propagation of surface plasmons is explained theoretically in this thesis and is found to be in good agreement with experimental results. 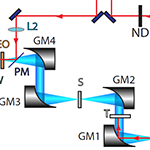