Abstract: The discovery of graphene in 2004 and the rise of the two-dimensional materials provide an excellent platform for developing optoelectronics for terahertz (THz) detection and mixing. For graphene and black phosphorus, their high carrier mobility, attractive electrical and thermal properties show promises for tunable terahertz technology. In the first part of the thesis, we discuss the THz photoresponse of black phosphorus (BP). The rediscovery of BP as a two-dimensional material in 2014 has drawn attention to its near and mid-infrared application. Here, we present an ultrafast THz detector based on black phosphorus with high efficiency at room temperature. The detector has a noise equivalent power of 130 µW/√ Hz at 2.5 THz, and an ultrafast photoresponse of about 20 ps was observed. Two detection mechanisms were observed: a strong photothermoelectric effect and a weak bolometric effect. The high carrier mobility allows BP to absorb THz radiation through free-carrier absorption, even thought the photon energy (10 meV) is far below the band gap (300 meV) of the material. The intrinsic responsivity of BP is also estimated via a Joule-heating experiment and using a free-carrier model. In the second part of the thesis, we discuss down frequency mixing and the fabrication process of a graphene FET mixer. Graphene exhibits a significant change in conductivity when the Fermi energy is altered by applying a gate voltage. Near the Dirac point, graphene field effect transistors (FETs) show a strongly nonlinear response (i.e. a nonlinear change in resistivity with applied gate voltage) that can be exploited to provide efficient rectification and mixing of THz signals. Although rectification in graphene field-effect transistors has been demonstrated, heterodyne mixing in the THz band has not been explored. We examine a THz graphene mixer using an antenna-coupled graphene FET configuration. We will discuss the antenna and graphene device design optimized for heterodyne mixing at 0.35 THz. In addition, fabrication and preliminary measurements of a microwave frequency prototype will be presented to demonstrate the principle of the operation. 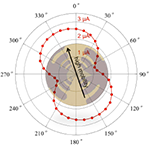