Abstract: In this thesis, we present the design, fabrication and application of two types of silicon-based terahertz waveguides. The first is anisotropically etched highly doped silicon surface for supporting terahertz plasmonic guided wave. We demonstrate propagation of terahertz waves confined to a semiconductor surface that is periodically corrugated with subwavelength structures. We observe that the grating structure creates resonant modes that are confined near the surface. The degree of confinement and frequency of the resonant mode is found to be related to the pitch and depth of structures. The second is silicon dielectric ridge waveguide used to confine terahertz pulses and study silicon's terahertz intensity-dependent absorption. We observe that the absorption saturates under strong terahertz fields. By comparing the response between lightly-doped and intrinsic silicon waveguides, we confirm the role of hot carriers in this saturable absorption. We introduce a nonlinear dynamical model of Drude conductivity that, when incorporated into a wave propagation equation, predicts a comparable field-induced transparency and elucidates the physical mechanisms underlying this nonlinear effect. The results are numerically confirmed by Monte Carlo simulations of the Boltzmann transport equation, coupled with split-step nonlinear wave propagation. 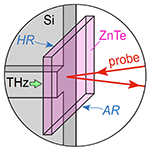