Abstract: This dissertation documents research of the optical properties of chip-based nonlinear waveguides to assess their suitability for all-optical processing in the telecommunications spectrum. Three related topics are presented: (1) enhanced continuous-wave four-wave mixing in AlGaAs waveguides; (2) a new method to characterize nonlinear refraction and loss in waveguides; and (3) the non-instantaneous optical nonlinearity of a hydrogenated amorphous silicon waveguide. For topic (1), enhancements of the continuous-wave four-wave-mixing efficiency and bandwidth are accomplished by engineering the growth and fabrication of AlGaAs waveguides. The bandgap of the core-layer alloy is tailored to suppress nonlinear absorption and the fabrication is optimized to produce small-mode-area, dispersion-engineered waveguides with sub-dB/cm propagation losses. A four-wave-mixing conversion efficiency of -6.8 dB is observed in an AlGaAs waveguide that exhibits a propagation loss of 0.56 dB/cm. This conversion efficiency is among the highest reported for any passive semiconductor or glass waveguide. Another low-loss AlGaAs waveguide is featured, which is dispersion-engineered to produce a measured conversion-bandwidth of 63.8 nm with a pump wavelength of 1550 nm. For topic (2), a new technique is described for accurately measuring the ratio between the imaginary part and the real part of a waveguide's third-order nonlinearity. Unlike most other methods, it does not depend on precise knowledge of the coupling efficiencies, the optical propagation loss, or the optical pulse shape. The method is applied to measure the nonlinear loss tangents of a GaAs waveguide, two bandgap-engineered AlGaAs waveguides, a large-area crystalline silicon waveguide, a crystalline silicon nanowire waveguide, and a hydrogenated amorphous silicon nanowire waveguide. For topic (3), pump-probe spectroscopy and continuous-wave cross-phase- and cross-amplitude-modulation measurements are used to study the optical nonlinearity of a hydrogenated amorphous silicon nanowire waveguide. The results are compared to those of a crystalline silicon waveguide of similar dimensions. The hydrogenated amorphous silicon nanowire shows essentially zero instantaneous two-photon absorption, but it displays a strong, long-lived non-instantaneous nonlinearity that is both absorptive and refractive. Power-scaling measurements show that the non-instantaneous nonlinearity of the hydrogenated amorphous silicon scales as a third-order nonlinearity. Phase-transient measurements show that the refractive component possesses the opposite sign to that expected for free-carrier dispersion. 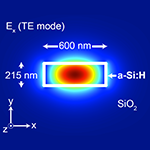