Abstract: Black phosphorus possesses several attractive properties for optoelectronics, notably a direct and layer dependent bandgap that varies from the visible to mid-infrared and the ability to transfer the material to nearly arbitrary substrates. A less utilized property of black phosphorus for optoelectronics is the nonlinear photoresponse. The photocarrier lifetime in black phosphorus exhibits a strong nonlinear dependence on the excitation density that is utilized in the present work for optoelectronic mixing. In this scheme, two telecommunications-band lasers are intensity-modulated by a radio frequency (RF) and local oscillator (LO) frequency and focused onto a black phosphorus photoconductive detector. Above the saturation carrier density, the photocurrent is proportional to the square root of the optical power which produces photocurrents at the sum and difference frequencies of the input beams. The bandwidth of the mixing process increases from 10 to 100 MHz for incident powers of 0.01 to 1 mW, respectively. An excess carrier model accurately describes the power dependence of the cutoff frequency and mixing conversion, which are both limited by photocarrier recombination. Optimizing our device geometry to support larger bias fields and decreased carrier transit times could increase the maximum RF/LO frequency beyond a GHz by reducing the excess carrier lifetime. Frequency mixing based on the photocarrier nonlinearity in multilayer black phosphorus demonstrated here can be readily extended to mid-infrared wavelengths as long as 4 µm. 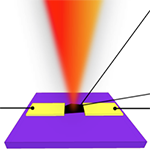