Abstract: To gain information on the abiotic synthesis of the building blocks of life from simple molecules, and their subsequent chemical evolution to biological systems, the starting point is the identification of target species in Titan-like planets; i.e., planets that resemble the primitive Earth, as well as in Earth-like planets in the habitable zone of their star, namely planets where life can be already originated. In this scenario, molecular spectroscopy plays a crucial role because spectroscopic signatures are at the basis of an unequivocal proof for the presence of these target molecules. Thanks to advances in many different techniques and NASA’s successful Kepler exoplanet transit mission, thousands of diverse planets outside of our solar system have been discovered. The James Webb Space Telescope ( JWST ), scheduled to be launched in 2018, will be very helpful in the identification of biosignature gases in Earth-like planets’ atmospheres and prebiotic molecule signatures in Titan-like atmospheres, by observing their absorption during transits. Although the search for key-target molecules in exoplanet atmospheres can be carried out by the JWST Transit Spectroscopy in the infrared (IR) region (0.6–29 μ m wavelength range), opportunities for their detection in protostellar cores, protoplanetary disks, and on Titan are also offered by interferometric high spectral and spatial resolution observations using the Atacama Large Millimeter/submillimeter Array. In the present work, target molecules have been selected, and their spectroscopic characterization presented in view of supporting their infrared and complementary millimeter/submillimeter-wave spectral observations. In detail, the selected target molecules include: (1) the three-membered oxygen-containing heterocycles, oxirane and protonated oxirane; (2) the cyclopropenyl cation and its methyl derivative; (3) two examples of ortho- and peri-fused tri-cyclic aromatic rings, i.e., the phenalenyl cation and anion; and (4) uracil, a specific RNA base. 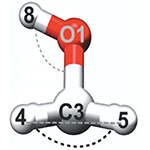