Abstract: Thin film oxides have attracted attention in implementations of gas sensors, notably NO2, owing to their unique physical, optical, and chemical properties. While the properties are presumed to be strongly dependent on the surface conditions of the thin films, it is not yet clear how surface properties of the thin film gas sensor affect its analyte sensing response. Here, we report the influence of surface carbon contamination and roughness on the NO2 sensing properties of TiO2 thin film sensors. The TiO2 thin films were prepared by rf-sputtering. The surface of the films were intentionally contaminated and damaged with organic polymers (photolithography resist) and microwave plasma, respectively. The surface chemistry of the films was assessed by high resolution X-ray photoelectron spectroscopy, and atomic force microscopy was exploited to obtain the morphology of the fabricated sensors. The work aims to improve the long-term efficacy of gas sensors by studying the reasons for degradation in performance. Our results indicate that the carbon residue and surface roughness of the TiO2 based sensor prolong the NO2 response time by roughly threefold and fivefold, respectively. The recovery rate of the sensor is deteriorated by the poor surface conditions as well. 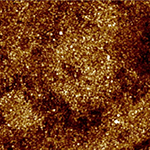