Abstract: Networks of nonlocally coupled phase oscillators1 can support chimera states in which identical oscillators evolve into distinct groups that exhibit coexisting synchronous and incoherent behaviours despite homogeneous coupling. Similar nonlocal coupling topologies implemented in networks of chaotic iterated maps also yield dynamical states exhibiting coexisting spatial domains of coherence and incoherence. In these discrete-time systems, the phase is not a continuous variable, so these states are generalized chimeras with respect to a broader notion of incoherence. Chimeras continue to be the subject of intense theoretical investigation, but have yet to be realized experimentally. Here we show that these chimeras can be realized in experiments using a liquid-crystal spatial light modulator to achieve optical nonlinearity in a spatially extended iterated map system. We study the coherence–incoherence transition that gives rise to these chimera states through experiment, theory and simulation. 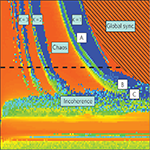