Abstract: We report an experimental investigation of the nonlinear optical properties of nanoporous silicon optical waveguides measured at 1550 nm. The nonlinear properties including two-photon absorption, self-phase modulation, free-carrier absorption and free-carrier plasma dispersion are characterized and compared with similar measurements conducted on a conventional silicon-on-insulator ridge waveguide. Our study reveals that even waveguides that are 70% porous exhibit two-photon absorption and self-phase modulation coefficients that are comparable to those of crystalline silicon. The free-carrier absorption and dispersion in porous silicon waveguides are found to be significantly faster, and stronger than those reported for crystalline silicon. 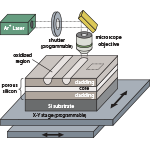