Abstract: We report a new type of optical clock recovery system that uses two-photon absorption in a silicon avalanche photodiode. Unlike many earlier approaches, the system is compact, broad-band, polarization-insensitive, and scalable to high bit rates. The system was successfully applied at 12.5 Gb/s with wavelengths ranging from 1530 to 1570 nm, and can establish and maintain synchronization for arbitrary input polarization states. The effect of polarization drift on the timing of the recovered clock was investigated and quantified. 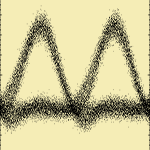